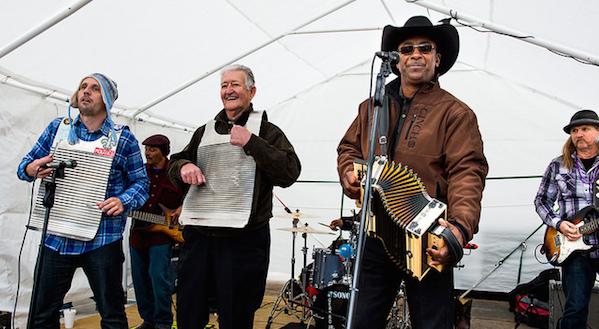 Leroy Thomas is enjoying his newfound fame. A zydeco musician for 31 years, Thomas estimates he’s traveled a million miles in the last 12 years with countless trips to Texas, California and beyond.

Now Thomas is performing at least 17 gigs a month in his home state of Louisiana. In recent weeks, he’s done photo shoots and interviews for magazines and newspapers, stretching from Lake Charles to New Orleans.

Thomas credits his musicians and a country flavor in his zydeco gumbo for the new celebrity.

“I started doing, instead of just zydeco and fast music, I played a lot of slow songs,” said Thomas, 49, who lives in Elton. “I started doing some swamp pop and country music.

“When I first started playing country in California, a few people would dance. But the guy that booked me said, ‘I don’t know about that country.’ I said ‘Don’t worry, they’ll be alright.’

Thomas heats up the zydeco/country gumbo even more with a hot CD, We Love You Leroy!, a new release on Maison de Soul Records. The disc features originals like “I Don’t Wanna Hurt Nobody,” “Zydeco Two Stepping” and “She Can’t Hen Like She Did Back Then.”

Leo’s influence goes back to Leroy’s childhood. Leroy and his brother imitated their dad when they made drums sets out of 5-gallon buckets and tree branches. They even hitched homemade wooden trailers, with lawn mower tires, to their bicycles so they could pull their drums to their pretend dances.

Leroy eventually became an accordion player in his dad’s band for 15 years. But Leroy wanted to sing and Leo would have none of it.

Leroy decided to become a full-time musician, leaving his job as a pipe welder in Houston.

“I walked off the job with three grand in the bank and $170,000 in debt and a credit score of 350,” said Thomas. “I lost a house in a divorce. I moved back to my mom and dad’s house and remodeled their whole house.”

Working on the house and playing music on the weekends, Thomas erased his debt in four years. He’s since bought several plots of lands and rent houses, including an 1,800-squre-foot home he gave to his parents.

Thomas plans for music and hard work to continue to build his future.

“I went from losing a house through divorce and no money. Now I have three houses and pieces of property and waiting to have my dream home built.

“I want the outdoor kitchen, the Texas fencing. It’s not going to look like Elton when you pass in front of my house. I promise you.”