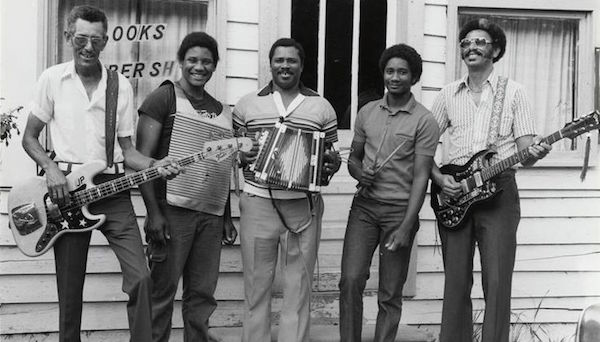 His playing bounced and leaped, sometimes galloping at a breakneck speed or meandering at a walk.

Horseman and musician John Delafose became well known following the 1981 release of his first album, Zydeco Man, with liner notes by the young folklorist Nick Spitzer. Delafose’s singing didn’t have a wide range, but it was warm and full of feeling, and his accordion style crackled with bundles of fast notes separated by long, mournful ones.

He learned a lot from senior Creole musicians of the old school, playing waltzes with two-steps and singing in French as well as English. His repertoire included traditional Cajun songs, songs learned from his musical mentors, covers of blues and r’n’b tunes, and original songs. Delafose had a huge south Louisiana hit with his 1990 “Joe Pete Got Two Women.” He often used traditional melodies with his own lyrics, a practice familiar in all folk styles.

Working musicians have a hard life, and Delafose’s second heart attack brought him down at age 55 as he played at Richard’s Club in September 1994. Son Geno switched from drums to accordion and carried on after his father’s death and today is one of the top players.