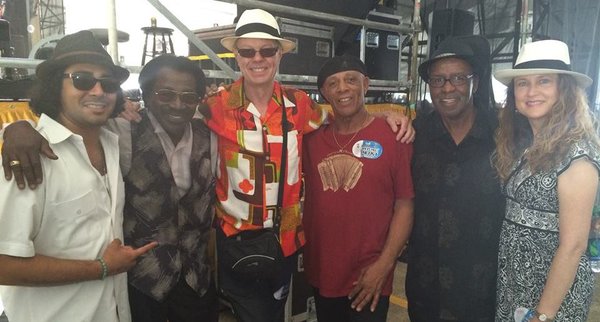 When I was sixteen years old, in the late 1960s, I dreamed of making records. I collected them, too, especially blues on 45 RPM discs. Yet, the men behind the records intrigued me as much as the music.

In the British blues magazine Blues Unlimited, I read about Louisiana producers Jay Miller, who recorded Slim Harpo for Nashville’s Excello Records, and Eddie Shuler, who made what may have been the first zydeco record with Boozoo Chavis for his own Goldband label. I was captivated by the work of Chris Strachwitz, whose records by Clifton Chenier on his Arhoolie label were my introduction to zydeco.

After a stint as manager of a record store in Boston, in which I fully indulged my passion for vinyl by building a larger roots music inventory than the owner thought prudent, I went to work for Rounder Records. In some ways, it was an anti-career decision, because several major labels had courted me with higher paying offers, but I loved the music that Rounder released. Maybe, I thought, I could at least be a fly on the wall as Rounder records were being made.

It didn’t take long, as the Rounder founders were open to my ideas, and not at all averse to expanding the label’s blues footprint. I can’t say that I completely knew what I was doing when I began making records for them, although I knew what I wanted to hear. In 1982, the label won its first Grammy with Clarence “Gatemouth” Brown’s Alright Again!, which I co-produced in Bogalusa, Louisiana. Then, the doors to Louisiana music flew open for me.

I made my first zydeco record with Buckwheat Zydeco after hearing him at the 1982 New Orleans Jazz and Heritage Festival. I was knocked out by the energy and precision of his set, which was presented like an R&B show. Soon, I was on the phone with his manager, Peggy Below, who took me with her parents to hear Buck at Richard’s Club in Lawtell. Such was my entry into Creole culture—old and young people dancing together; starched and pressed jeans; cowboy hats; setups of Crown Royal and Coke; and the warmth of the people in the packed club, at least after they figured out I was Peggy’s guest and not a cop.

We made both of Buckwheat’s Rounder records in Massachusetts, at Blue Jay Studio, during his first two tours of the Northeast. For the first, Turning Point, he played many songs from his live set, and engineer Glen Berger did a masterful job of capturing the energy. Noticing the thin, wheezy sound of Buck’s internal accordion pickups (the sound used on most zydeco records), we decided to record the accordion acoustically—with two microphones in front— as well as using the pickups. It’s something I’ve done on every zydeco record since. Since Buck had brought only one horn player, trumpeter Calvin Landry, we double- and triple-tracked him to create the horn section on the record, while Buck overdubbed piano and organ on several of the songs. Otherwise, you hear the band playing live.

On the follow-up, Waitin’ For My Ya Ya, we got more adventurous. Instead of trying to capture a live set, we developed several songs that were new to the band, anchored by the rhythm section of bassist Lee Allen Zeno and drummer Nat Jolivette, whom I thought of as the Sly and Robbie (the famous reggae rhythm section) of zydeco. When we came up one song short, I stayed up most of the night looking through my record collection, and brought Lee Dorsey’s “Ya Ya” to Buck the next day. I could see the gears immediately start to turn. He walked out to the piano and played the reggae-based motif that anchors the song, and we built on that. When engineer Gragg Lunsford and I mixed the song, we were still thinking reggae—a huge low end and no reverb. Rounder arrangend for Floyd Soileau to release “Ya Ya” on a 45, and it became a major regional hit, getting airplay on Lafayette rock stations. Buckwheat showed me how malleable zydeco can be—Creole soul music.

Buck soon signed to Island Records, a major label, but I was ever more fascinated with zydeco. In 1987, we recorded a weekend of bands at Richard’s Club —Nathan and the Zydeco Cha Chas, John Delafose and the Eunice Playboys, Willis Prudhomme and the Zydeco Express, and Boozoo Chavis and the Magic Sounds. Engineer Mark Bingham had a new Sony F-1 digital recorder, and we decided to record everything live to stereo, taking a purely documentary approach. Musician John Mooney lent us his van to use as a recording studio. The recordings came out well, although the booming bass frequencies coming through the walls of the club made us back of on recording the bass—exactly what we did not intend. Still, the project led sooner or later to individual records with all but Prudhomme.

Nathan and the Zydeco Cha Chas came with the recommendation of Buckwheat, who was a good friend of Nathan’s brother Sid, the “Don King of Zydeco” and a warm-hearted entrepreneur. Nathan Williams was just beginning his career, with two singles on his own label. His greatest gift may be the ability to transform to the idiomatic language of Creole culture into zydeco songs, and his “Everything on the Hog,” the title track of his first Rounder album, was the first in a long line of cleverly crafted compositions. We recorded at Southlake Studio near New Orleans with David Farrell, who had engineered the Gatemouth Brown record, and we became more confident in what we were going for—a clear, acoustic accordion sound; a fat, funky low end; and musical arrangements that would make each song distinctive. With Nathan, we aimed to make records that listeners as well as dancers would appreciate.

John Delafose was an heir to the Creole music of Amedée Ardoin and the Ardoin family, all of whom were from the area of Duralde, Louisiana, near Eunice, and his adaptation of Canray Fontenot’s “Joe Pete Got Two Women” had been a hit for Arhoolie. By 1992, I was making records regularly with David at Ultrasonic Studio in New Orleans, and I invited John and his son Geno to record there. I booked two days in the studio, as well as hotel rooms for band. John said, “Well, I don’t know about that.”

He and the band arrived at one in the afternoon on the appointed day, and we were rolling tape by two. Then, for the next two and one half hours, John and the band played at full-throttle, until we had twenty-two songs on tape. It was as if they were playing for a dance, with John becoming impatient when we had to stop to change tape reels.

When it was clear that we had our album, I shook his hand, paid him, and congratulated him on making such a great record. “Do you realize what you just accomplished?” I asked him. I told him that if he could wait for about one hour, we could make rough mixes for him to listen to on the way home. “Why don’t you send them to me,” he said. “We have to go home and feed the horses.” When my idol Chris Strachwitz congratulated me on the sound and energy of the record, I felt as if I had accomplished something, too. I learned from John how music that is so deeply rooted in a living culture can be free of the self-consciousness that can take the spirit out of recording, and that is what I came to appreciate most about zydeco—the almost universal willingness to go for it every time.

I am ever thankful for the enthusiasm and kindness of the musicians and engineers with whom I collaborated in those early years of making zydeco records. I went on to make many more, by Beau Jocque, Geno Delafose, Li’l Brian, Boozoo Chavis and others (as well as many other roots-oriented records), in what may have been the golden age of zydeco. Perhaps, we even planted some of the seeds for the scene that thrives today.