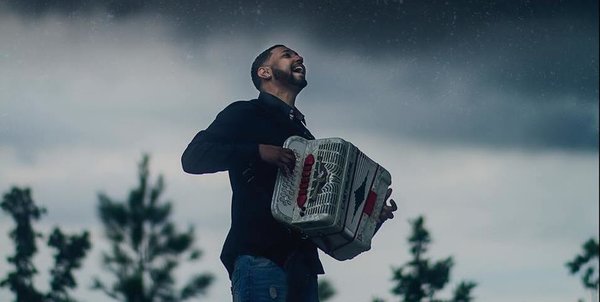 The late Rockin’ Sidney, Grammy winner and composer of zydeco’s lone million seller, “My Toot Toot,” was Cedryl’s maternal grandmother’s husband. When Cedryl plays his white, triple-row accordion, he’s carrying some of Rockin’ Sidney with him.

“He left that white accordion for me,” said Ballou, 32. “He played the piano note (accordion) and he was learning how to play the triple row.

“He had written the notes to ‘Don’t Mess with My Toot Toot’ with a Sharpie on the accordion. With the sweat and everything, it’s faded away.

“I tried to keep his handwriting on it. It’s still pretty special.”

Ballou has been showing off his family’s music legacy with his own brand of high-energy, contemporary zydeco, which is prominently displayed on his latest CD, “Country Roads.” Public radio station KRVS in Lafayette, La. recently featured Ballou and band performing the single, “Letter,” in its Local Produce video series, which can be seen on YouTube.

Although he’s only 32, Ballou has more than 25 years’ stage experience. At the age of 5, he started as a drummer in his grandfather’s band.

The family was living in Waco, Texas, where Classie Ballou led the house band at Walker’s Auditorium. The group performed as the opener and house band for James Brown, Ike and Tina Turner and other R&B legends.

“He gave me a chance to get on stage and develop my showmanship,” said Ballou, a former member of the new defunct group, Soul Creole. “Even when drummers were calling and telling you, ‘You got that kid, you need a real drummer.”

“He’s tell them, ‘No, I’m using my grandson. I don’t have to go looking for him. He doesn’t have bad habits.’

“I was around him all the time. He was the one who really taught me the game, all the ins and outs of being a musician.”