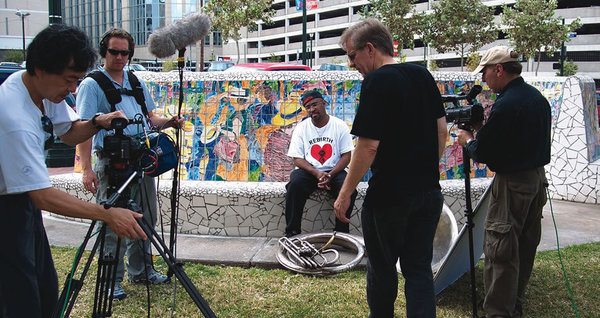 Ten years ago this Saturday, Hurricane Katrina struck the Gulf Coast, displacing hundreds of thousands of residents and causing massive damage to the southern states. With the country recoiling from the blow, filmmaker Robert Mugge, who has been documenting our Zydeco Crossroads journey this year, captured the devastating shockwaves and glimmers of hope surrounding the hurricane in his 2006 documentary New Orleans Music in Exile.

Among the region’s evacuees were the many artists that give Louisiana its colorful spirit, forcing them to find refuge in nearby states. Mugge traveled west to Texas and north to Tennessee and Pennsylvania to find the musicians who were exiled from their homes.

A 2006 article in Jazz Times detailed Mugge’s experience while filming the documentary:

“There’s a real dichotomy of emotions throughout the film because that’s how these people are functioning down there,” says Mugge. “They’re going between pain and depression on one hand and sometimes absurd hope—but hope nonetheless—that they’ll bring the city back, bring the music back and bring their own lives back on track as well. And in some ways, things are flourishing a little bit more in the city now than when we shot in late October into mid-November. But in many other respects, it’s scary how much hasn’t changed at all. Many of these neighborhoods still don’t have power or water, no mail delivery, no phone service. So it’s gonna be such a long haul to bring things back 100 percent.”

In one telling sequence, Mugge intercuts concert footage of Dr. John performing “Walk on Gilded Splinters” with footage from a day of the dead voodoo ceremony, which serves as a potent metaphor. “I had this sense, coming down to New Orleans, that I was seeing a body that had lost its spirit and the people were trying to get that spirit back,” says Mugge. “And to a great extent music was that spirit. Maybe it’s not the whole thing but certainly, metaphorically speaking, it is that spirit. And in telling the story of these exiled musicians we get the larger story of what has been lost here.”

In the clips below you’ll see interviews with New Orleans residents, musician Theresa Andersson singing Neil Young’s “Like a Hurricane,” Dr. John singing “Walk on Gilded Splinters,” a voodoo priestess honoring the day of the dead, Cyrille Nevile lifting spirits with “I Will Survive” while in Memphis at the relocated Voodoo Festival and Marcia Ball giving  a moving performance of Randy Newman’s “Louisiana 1927.”