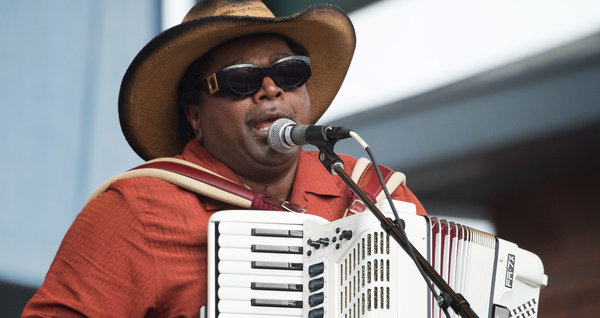 Nathan Williams has lived by the words, “you reap what you sow.” In his 30 years as leader of Nathan and the Zydeco Cha Chas, Williams has worked hard, throughout the United States and Canada, to establish a reputation as an ambassador of Louisiana culture.

Williams is pleased with the results.

“I keep putting out the best I can and keep moving,” said Williams. “Hard work pays off, no matter what you do.

Good came back to Williams July 18 when the Louisiana Folklife Center inducted him into its Hall of Master Folk Artists. Located at Northwestern State University in Natchitoches, the Center serves as a research facility and archival repository for folklife materials.

Williams is grateful for the recognition.

“I’m so amazed by every show that I do that I’m happy that I do it,” said Williams. “I feel good about it. God gives me a chance to be the best at what I do. I just thank God for that.”

Williams has created a lengthy resume and numerous connections in his three decades in music. In his numerous travels, he’s shared stages with Janet Jackson, B. B. King, Allison Krauss, Travis Tritt, James Brown, Trombone Shorty and other stars.

Williams has passed along his legacy to his son, Nathan Jr., leader of contemporary zydeco favorite, Lil Nate and the Zydeco Big Timers. The father and son now record on the family’s own record label, Cha Chas Records.

Despite his global notoriety, Williams welcomes the opportunity to play more at home. Except for the Breaux Bridge Crawfish Festival and New Orleans Jazz and Heritage Festival, his gigs have mainly been on the road.

The band’s summer schedule has taken him to Canada, Massachusetts, New York, Maine and Rhode Island.

“I’d like to play at home more, but I just thank God for what he gave me,” said Williams. “He knows that I try to be the best that I can be in my life.

“I’m not rich, but I’m rich in spirit. I never try to think I’m more than anybody else. I never try to hurt people’s feelings, talk bad to anybody. I’ve never been like that all my life. That’s want counts.”