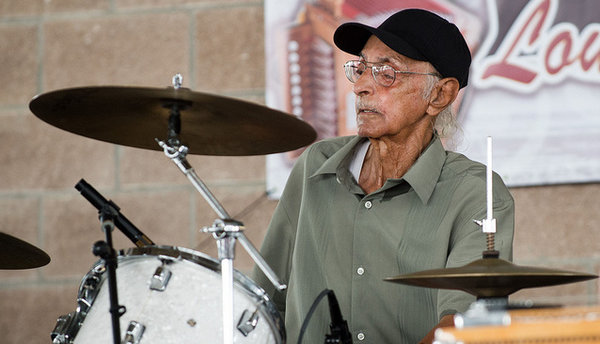 Musicians, friends and fans are remembering legendary zydeco and R&B drummer Clarence “Jockey” Etienne, who died Aug. 16 at his home in Lafayette, La. He was 81.

With more than 50 years as a musician, Etienne played with zydeco legend Fernest and the Thunders, the Creole Zydeco Farmers, and swamp blues artists, such as Lazy Lester, Carol Fran and Katie Webster. In recent years, he toured with the swamp pop supergroup, Lil Band O’ Gold.

In the 1960s, Etienne toured with R&B greats Solomon Burke and Joe Simon and played drums on “Nine Pound Steel,” “Choking Kind” and other Simon recordings.

Etienne, known for his rhumba beat, was a studio musician at J. D. Miller’s famed studio in Crowley, which produced national and regional hits for Slim Harpo, Guitar Gable and many others. In the studio’s meager beginnings, Etienne played a cardboard box on Harpo’s “Scratch My Back,” which became a No. 1 Billboard R&B hit in 1966.

Etienne also played his improvised drum on Harpo’s 1957 release, “I’m a King Bee,” which was later recorded by The Rolling Stones on their debut album of 1964.

“All the times Lil Band O’ Gold would do something, he was there with his cardboard box,” said Sinegal. “We did three shows with Robert Plant (of Led Zeppelin). He was amazed to see Jockey play with that cardboard box.

“He started with what they call swamp pop, but it was really rock ‘n’ roll. He brought that to zydeco. He had to learn the little licks for zydeco, but he kept his own style.

“He was steady. As he got older, he could keep up and kept doing it all the way until the end.”

“What he gave, would literally be impossible to over-exaggerate,” wrote Adcock. “But alas, there are no words that can describe that feel, the gentleman’s soul and his immense wisdom. If you’ve had the privilege to feel or know it, then you just do. The records he played on and anecdotes from a fascinating life, will trump forever. But regardless, each one of us only gets to ‘rock-a-while’.”

Etienne earned the nickname “Jockey” after he began racing horses at the age of 7 at local tracks. He later did races as far as Mexico, before he became too tall to ride and retired.