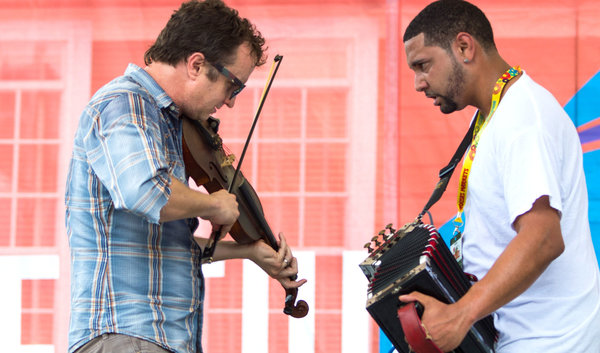 For two years, Soul Creole, a Cajun and zydeco jam band, created a buzz that captured attention from gigs before movie stars in New Orleans to NPR. But commitments to other bands and family matters have forced members to put the group on “indefinite hiatus,” according to founder and fiddler Louis Michot.

Those commitments include a major documentary on PBS this fall. Michot and his full-time band, the Lost Bayou Ramblers, star in American Epic, a music documentary produced by T Bone Burnett, Robert Redford and Jack White.

The documentary recalls the 1920s, when record companies toured the United States recording some of first music to emerge from America. Those early recordings of blues, gospel, Hawaiian, Cajun and folk music laid the foundation for today’s pop, rock, R&B and hip hop sounds.

The Lost Bayou Ramblers will be featured performers in the documentary, along with the Alabama Shakes, Beck, Merle Haggard, Elton John, Los Lobos, Steve Martin, Willie Nelson and many others.

“It’s going to be an amazing documentary,” said Michot. “There’s video footage from all the old sessions that no one has ever seen.

“We perform on the original microphone and wax pressing machine that Louis Armstrong recorded on, along with Joe and Cleoma Falcon. It’s a pretty big deal.”

But during their rise in popularity, members juggled their own bands and jobs. Accordionist Cedryl Ballou leads his Zydeco Trendsetters. Guitarist Chad Fouquier also works with Ballou and the Tipitina’s Music Office Co-Op,  a musicians’s resource center in Lafayette.

Michot has played with the Lost Bayou Ramblers for 16 years. He and his wife Ashley, who played triangle with Soul Creole, are parents of two home-school children, ages 3 and 6.

Michot said the juggling acts became too much.

“We had a great two years with a band I started on the side for brewery gigs,” said Michot. “Then it turned into a real band. It was a real fun side band.

“The fact that my wife Ashley and I are both artists and we happen to be married with kids was tough. We put in two solid years and every single moment of our personal time into it. At the end of the two years, it was too much to continue.

“We just decided that we do so much music and art already, we had to make a choice.”

Michot added that the door is not entirely closed on Soul Creole.

“It was a beautiful thing. Hopefully we can continue to work when things even out a little bit. For now, we definitely, just glad that it’s a problem of too much and not too little.”