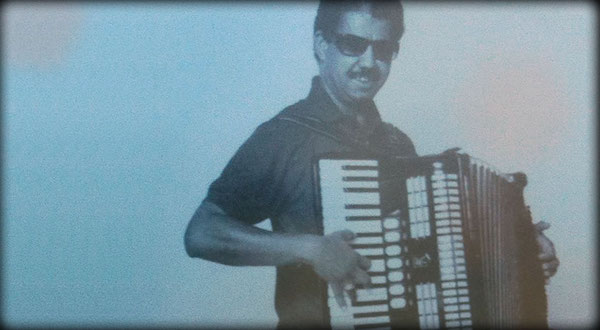 Growing up in Lafayette, Louisiana in the 1950s, Lynn August‘s mother encouraged him to take up music after he began singing songs by Fats Domino, Lloyd Price and Clifton Chenier.

His music career began with him playing drums in a band his dad managed.  At age 11, he learned piano and organ from singer and songwriter Esquerita.  His career went from solo to big band and back during the 1960s and 70s.  Marcel Dugas hired August to play organ with his band in 1977, but after a bar brawl August returned to non-zydeco solo gigs: hotel lounges, churches and weddings.

It wasn’t until 1988 that August came back to zydeco with a piano-key accordion.  He plays with influences of swamp pop and rhythm and blues, singing in French and English.

August plays one exceptional style, the juré (zhoo-ray), a Creole musical style with acappella group singing, clapping and dancing.  Until August brought it back in his 1992 release, “Creole Cruiser,” it had last been recorded on the Lomax south Louisiana field recordings of the 1930s.  His prize possession is a pink 1958 Cadillac, seen on the cover of “Creole Cruiser.”