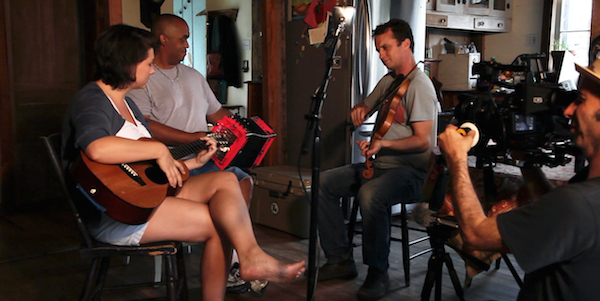 Inspired by John and Alan Lomax’s field recordings of the 1930s, Alex Steyermark and Lavinia Jones Wright began The 78 Project in 2011 as a way of connecting a thread from those early archival recordings to contemporary musicians. Armed with a 1930s Presto direct-to-acetate recorder and many painstakingly-crafted acetate disks, the Philadelphia area filmmakers travel across the country to encounter musicians of all styles.

Featured in the documentary is an early iteration of Soul Creole. In 2013 Steyermark and Wright drove to Arnaudville, Louisiana to meet up with Corey Ledet, Louis Michot and his wife Ashlee and record them performing a song in one take, straight to acetate. The trio sings a beautiful rendition of the traditional cajun song “Trape Mon Chapeau.” From the folks at The 78 Project:

Louis Michot told us that what he loved about French music was that everyone playing was driving the same rhythm and the same melody together at the same time. A community of song. We had driven to the Michot family home in Arnaudville, LA last August, and in the course of a hot and happy afternoon, recorded Louis with his wife Ashlee and their friend and musical collaborator Corey Ledet for The 78 Project Movie. The trio cut a 78 of the traditional Cajun dance-ending song “’Trape mon chapeau,” fiddle, accordion and guitar working together the whole way through to forge a powerful, cohesive feeling into the song. Compelling imaginary dancers to crowd together on the floor and enjoy the last joyful moments of the party.

Prior to the segment with Soul Creole, Steyermark and Wright get a lesson in the history of zydeco and Cajun music and listen to Lomax’s recording of a juré musician, performing a style of music that many call the roots of zydeco (you can read Michael Tisserand’s thoughts on these recordings in Kingdom of Zydeco).

Upcoming screenings of The 78 Project are listed below. You can purchase the soundtrack and listen to a clip of “Trape Mon Chapeau” here.  Listen to one of Lomax’s recordings of juré musician Jimmy Peters below, followed by the The 78 Project trailer.

Write to contact@the78project.com to set up a screening in your town.