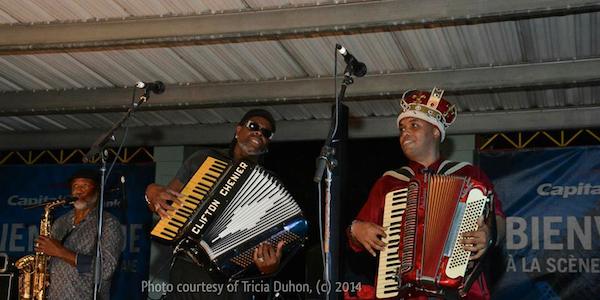 Part of the new generation restoring the heritage of Louisiana Creoles, Corey Ledet spent summers in Parks, Louisiana growing up though he was born in Houston, Texas. Ledet was influenced by Zydeco masters John Delafose, Beau Jocque, Buckwheat Zydeco, Clifton Chenier and Boozoo Chavis and today he plays classic, original and borrowed songs.

Like many Zydeco musicians, he began on the drums by age 10, a legacy of his grandfather who played drums for Clifton Chenier. Ledet added accordion by age 12 and plays single-row, triple-row and piano-key accordions. After high school, Ledet relocated to Louisiana to further soak up the Creole culture at live shows and from recordings. He has played around the United States, the Caribbean and Europe.

Corey Ledet formed His Zydeco Band in 2003, which includes former Clifton Chenier-sideman Lil Buck Senegal on guitar and Morris Ledet on bass. His CD Nothin’ but the Best was nominated for a Grammy in the short-lived Cajun or Zydeco category.