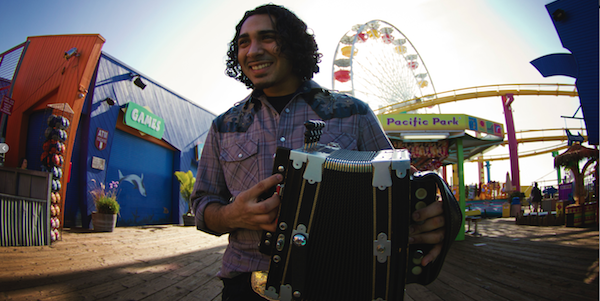 Houston, Texas native Ruben Moreno sits at the joint of Zydeco and R&B, using his band Zydeco Re-Evolution to connect the traditions he was surrounded by while growing up with the constantly changing modern trends of the music’s culture.

His childhood was spent in the company of his grandmother (who owned a bar in the East part of the city) and her friends, many of whom were Zydeco musicians.  After picking up the washboard while still very young, Moreno’s musical turning point came when he performed on stage at age 10 with Leroy Thomas.  It was an experience that inspired Moreno to focus his energy on becoming a performer and subsequently lead to tours with CJ Chenier and Andre Thierry.

For Moreno, though, it’s about more than just the music.  He sees his career as a tool for making the world better, admiring Martin Luther King, Jr. and Bob Marley for using their talents to enable and encourage change.

But he doesn’t let the heavy things get in the way of Zydeco’s natural ability to make you feel good.  His 2011 debut Por Ti Volare is full of upbeat, syncopated rhythm and his own soulful voice, with universal themes of love and heartbreak.

Watch Moreno & The Zydeco Re-Evolution perform “You & I” off of Por Ti Volare live at the Blue Moon Saloon in Lafayette, LA below.