Listen Live: Creole United in concert from the Blue Moon 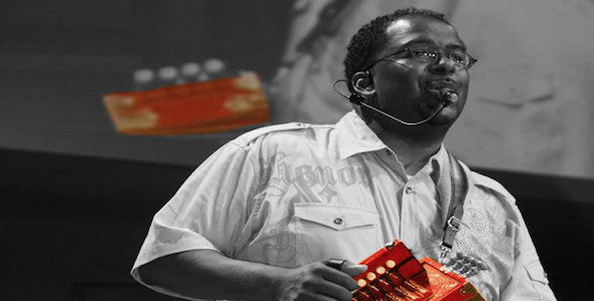 Tune in Thursday evening, October 30th to KRVS in Lafayette, Louisiana and WXPN in Philadelphia, when Zydeco Crossroads presents the zydeco all-star group Creole United live in concert from the Blue Moon Saloon in Lafayette. Creole United features Andre Thierry, Sean Ardoin, Edward Poullard, Rusty Metoyer, Jeffery Broussard and Lawrence Ardoin. The show is the first of many live Zydeco Crossroads broadcasts happening in the upcoming year, and will be filmed for a documentary by filmmaker Robert Mugge. The show will be co-hosted by Herman Fuselier of KRVS and David Dye, host of the nationally syndicated World Cafe.

Writing a review of the album for Offbeat Herman Fuselier said:

Who says rural Creole accordion music, the sound that gave birth to zydeco, has to be French songs from the early 20th century? Not Creole United, a collection of three generations of Creole and zydeco artists whose pedigree ranges from young upstarts to the some of the music’s most historic names.

The lineup is indeed stellar: Lawrence Ardoin and his son Sean, descendants of Creole accordion great Amedé Ardoin; and Jeffery Broussard, son of the legendary Delton Broussard, who helped usher in the modern era with Zydeco Force before returning to his roots with his current band, the Creole Cowboys.

The band also includes Edward Poullard, who is one of the few black Creole fiddlers remaining. Poullard studied with a pioneer, the late Canray Fontenot, and teaches at cultural camps throughout the country. Accordionist Andre Thierry has lived up to the prodigy blessing bestowed on him by zydeco king Clifton Chenier. Only three years removed from high school, Rusty Metoyer is adeptly absorbing all their lessons.

Below, listen to a couple of songs from Creole United’s debut album, Non Jamais Fait.